Design-oriented exhibitions and events are meant to encourage action versus observation. 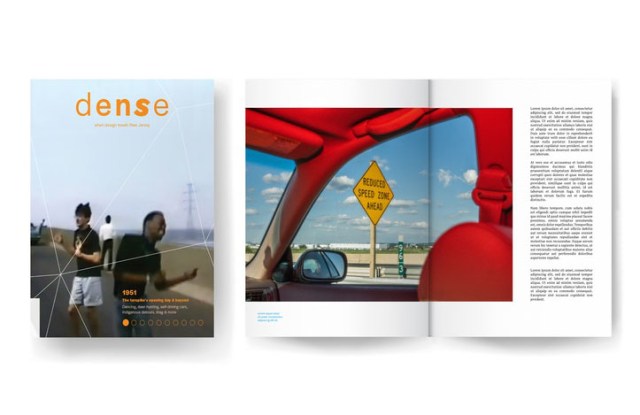 Design is coming to life in different forms in New Jersey, Nantucket, Mass., and the Hamptons.

A mission-driven design magazine, student-sourced exhibition and festivals are a few of the ways different organizations are trying to drum up design-driven action. Instead of making design all about observation and admiration, a few East Coast communities are trying to spur people into action.

New Jersey has been the brunt of endless jokes through the years, thanks largely to out-of-state travelers cruising down the New Jersey Turnpike en route to somewhere else. The upcoming launch of a design magazine aims to help change that 65 mph view.

Called Dense, the name is a riff on the state being the second most densely populated one in the U.S. (only to be outdone by the District of Columbia). Rather than spotlight people, places or objects as several other design magazines do, Dense will examine 10 events that happened or are expected to occur, while highlighting the larger contexts of each event. The mission-driven magazine, which will be published 10 times annually, has a $43,000 Kickstarter campaign that had raised $27,300 as of Wednesday afternoon.

Dense is a project by DesignShed, which was started three years ago as a year-round organization with programs that celebrate the community’s creative capacities and to mobilize them for a more equitable future. Dense’s Petia Morozov and Lune Ames will roll out the first of Dense’s 10 issues on Oct. 1. The launch date coincides with the start of Montclair Design Week, which will run through Oct. 10. The event’s theme of “If Not Now, When?” is meant to relay a sense of urgency in that the future we want won’t design itself.

Dense will highlight the interconnectedness between culture, education, public space, history and environmental justice. The first edition will have 148 pages with essays, interviews, visual inserts, fictional accounts and original works by contributors from New Jersey and other states. There will also be archival material featured that is meant to make readers consider “What if?” scenarios.

Localized design initiatives are underway in other areas of the East Coast, including Nantucket. The three-day Nantucket by Design festival kicks off Thursday with a keynote by interior designer Nate Berkus. Renowned interior designer Alexa Hampton will sit down with former Chanel brass Arie Kopelman, who is the Nantucket Historical Association’s board chair, to discuss incorporating antiques into modern interiors. He and his wife are honorary chairs of the Nantucket Summer Antiques Show preview party.

Nantucket by Design has also lined up Isabella Rossellini to chat with her architect friend Pietro Cicognani, as well as Corey Damen Jenkins who will speak with Chesie Breen. Non-islander or vacationing ticket holders can access the discussions virtually.

Through Saturday, a selection of small businesses, artisans and designers including fashion ones will have their goods sold in a pop-up shop at The Poppy Caravan. And through the 2021 New York School of Interior Design Student Project, students have developed  narratives about design concepts to reconsider modern life in some of the island’s historic properties. Nantucket has one of the largest concentrations of pre-Civil War-era buildings and homes in the country — 800-plus, according to the Nantucket Preservation Trust.

One of this year’s winning designs is an immersive gallery space at the Thomas Macy Warehouse. Created by third-year graduate students Sheng Wei Yang, who has a background in fashion design, and Nelson Sanchez, the old warehouse space is reimagined as a meeting place for tourists and locals to explore history, art and entertainment.

The Greek Revival building’s namesake was an enterprising whale oil merchant. R.H. Macy, who was born on Nantucket in 1812, was among Macy’s descendants. During a brief stint as a whaling ship crew member, Macy got a red star tattoo, according to local lore. That emblem reportedly inspired the red star logo that Macy’s Inc. still uses today.

The Envision Resilience Nantucket: Designs for Living Seas exhibition is on view at the warehouse through December. The show spotlights student design proposals for how local businesses and residents can deal with rising sea levels. It was created to inspire the community and other coastal towns and cities to be more adaptive. Five universities took part in the project, which was opened by ReMain Nantucket. That organization and ReMain Ventures are funded by Wendy Schmidt and her husband Eric (who served as Google’s chief executive officer until 2011) to support the island’s economic, social and environmental vitality.

In Sag Harbor, the inaugural Galerie House of Art and Design debuts this weekend. Hudson One Media is trying to bring its Galerie magazine to life via a shingle-style estate set on six acres. Following Thursday night’s VIP preview, the show house will open to the public Aug. 7 on Fridays through Sundays with an end date of Sept. 7. An assortment of designers, artists and galleries are pitching in. Jack Pierson and designer Billy Cotton are working on a mural for the downstairs living room, Jim Lambie is creating a custom staircase art installation in the entryway, and designer Mark Cunningham is bringing in a work by artist Vik Muniz from Nara Roesler. Designer Leyden Lewis is collaborating with the Marianne Ibrahim gallery to highlight works by Raphael Barontini, Florine Demosthenes and Zaharia Opoku, as well as Salon 94 for works by Lyle Ashton Harris and Luis Flores. The event will benefit the Stony Brook Southampton Hospital’s East Hampton emergency department.